What is Alzheimer’s and Dementia?

In order to understand what dementia is, it is important to first breakdown what is meant by the term, “memory”. Memory is the power or process of reproducing or recalling what has been learned or retained. Essentially, it is storing information in the brain and the ability to find that information at a later time. There are different types of memory, both short-term and long-term. Long-term memory can be broken down into the conscious and unconscious. Conscious memories would include things that happen to you (episodic memories) or general knowledge that you have learned (semantic memories). Unconscious memory includes things such as fine motor skills (procedural) or automatic associations (priming). Different areas of the brain will store different types of memory.

As people age, some memory changes can be expected. If this is the case, what would be considered “normal?” In normal aging, memory decline is often in the areas of learning new information or recalling newly learned information. For example, a person may have trouble remembering new names, have a harder time multi-tasking, or have a slower reaction time. That being said, memories from long ago, procedural-type memory, and facts known prior to aging should generally be maintained.

So what is dementia then? Dementia is a general term, not a specific disease. Dementia is a decline in memory and other mental abilities that greatly interferes with daily living. There are many causes for symptoms of dementia, however the most common is Alzheimer’s disease, which makes up 60-80% of all dementia cases.

Alzheimer’s disease is progressive, and there is currently not a cure. While the exact cause is unknown, it is generally known to be a disease of the aging. In the United States, 5.8 million people have Alzheimer’s, 1 in 8 people over 65 years and 1 in 2 people over 85 years. 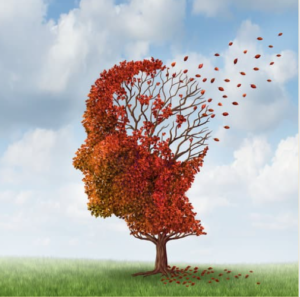 The signs and symptoms of dementia will vary depending on the progression. At the onset, folks may experience challenges with their short-term memory, and struggle with things such as paying the bills, preparing meals, forgetting appointments, or getting lost in a known area. With a moderate stage, an individual may have trouble speaking or understanding speech and they may not understand spatial awareness. In severe stages, a person will no longer have the ability to communicate and will be unable to care for themselves.

If you or a loved one believe you may be experiencing dementia, it is important to not ignore the signs. While Alzheimer’s is the most common cause of dementia, there are other causes that may be reversible. Additionally, resources such as support groups, caregiving, and therapy may be available. Being a caregiver to a person with dementia is a challenging and emotional task. Check back in with the blog in a few weeks to read about some tips for caring for a loved one with dementia.