Client Corner: A Conversation with Veronica

Meals on Wheels of Central Maryland serves thousands of clients every year, each with their own unique histories, talents, and stories. Veronica F., a 75-year old Perry Hall resident, is a Grocery Assistance Program participant who also happens to be a gifted self-taught artist. Born in Brooklyn, NY, Veronica lived in New York and Florida before moving to Maryland in 2001. 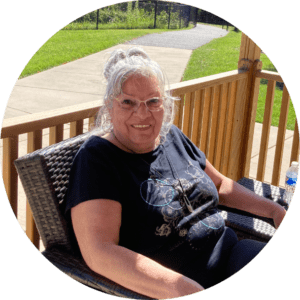 Veronica has always been an artist, remembering how she would draw her classmates’ portraits in elementary school. Veronica does not recall a time when she didn’t create art. Without any formal training, she wondered why people always admired her work, simply seeing it as an extension of herself. When living in New York, Veronica sold her first portrait of two boys for $25.00. After moving to Maryland as an adult, she really began to cultivate her craft. She would engage local artists whose work she admired and they would teach her. In doing so, she has learned countless techniques and styles, adjusting each to her own skillset.

Over the years, Veronica became a teacher herself, giving her time to learners in her building as well as private students (including a legendary bridal gown

designer). Beyond art, Veronica also loves to cook, once appearing on the MPT network preparing a dish on television.

In 2017, Veronica suffered a stroke and began receiving home-delivered meals through MOWCM as she recovered. Following recovery, she was able to maintain cooking and shopping independently until the pandemic struck. She was stuck at home and didn’t know how she would get her groceries and household supplies. Her neighbor told her that in addition to home-delivered meals, MOWCM also offers the Grocery Assistance Program (GAP).

Started over 20 year ago, GAP volunteers shop for and deliver needed grocery items to participants based on an agreed upon shopping schedule. Veronica has been a part of the program for several months now and loves it. It allows her to stay safe at home while continuing to get the food and household items from her local grocery store she has come to enjoy. Veronica says, “I am so happy that something like GAP exists, allowing me to create my art at home and cook healthy meals, worry-free.”